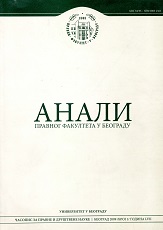 Summary/Abstract: International law has been facing the problem of its own fragmentation from the early stages of international organizing at the dawn of 20th century. The process of globalization has a tendency to unify social phenomena on a world scale. Nevertheless, the practice of diversification of international organizations, based on both regional and substantial criteria, creates great tensions. The tension due to such expansion has been growing both vertically, i.e. between the general international law and the particular international laws; and horizontally, i.e. among diverse particular legal systems. In the year 2006, subsequent to frequent warnings from the high-ranking international officials and scholars alike, the UN International Law Commission was propelled to produce and submit to the General Assembly a report on the above mentioned issue („Koskenniemi Report“).