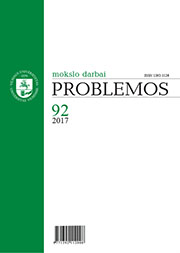 ISTORIZMO KRITIKA BE MORALĖS
A CRITIQUE OF HISTORICISM WITHOUT MORALITY

Summary/Abstract: The aim of the article is to reveal the roots of Leo Strauss’s indifference towards moral philosophy. The works written by the philosopher from 1930 to 1932 reveal the close connection between his critique of modern philosophy and historicism. The analysis of the relationship between these two critiques allows us to provide an explanation of Strauss’s indifference towards moral philosophy. In his critique of historicism Strauss refuses to give moral evaluations, because taking a firm moral stance is incompatible with his understanding of what philosophy is. According to his understanding philosophy is an unfinishable ascent towards wisdom, an activity free of any moral commitments. Such a conception of philosophy is the reason behind the one-sidedness of his critique of historicism. Strauss takes for granted that morality is not an autonomous sphere of human life and that it has to be supported by religion and philosophy. Since his early writings he defended the position that religion is incompatible with philosophy. However, by denying the autonomy of morality, he denied the possibility of developing a moral critique of historicism. Strauss does not deny the importance that philosophy has for morality. However, he cannot speak about the influence that morality has on philosophy. For this very reason he does not use moral arguments. Such a way of criticizing historicism would be incompatible with his understanding of philosophy.