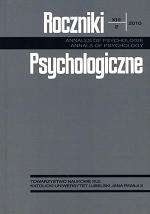 Summary/Abstract: Understanding the complex relationships between values and religiosity may provide a better understanding of what is the role of values in social life and what it means to be religious. Values express what people believe to be good or bad, and what they think should or should not be done. Similar aspects of normative behaviour can be found in religion which can imply mutual connections. This article focuses on the issue of relationships between values and religiosity from cognitive and social perspectives. The study involved 247 subjects (women and men) aged 18-56. Three scales were employed to conduct the research: Post-critical Beliefs Scale, Centrality of Religiosity Scale, Scale of Scheler’s Values. The results confirmed strong relations between the values system and religiosity dimensions. Both cognitive and social dimensions of religiosity are connected with value systems. People who are more committed to religion attribute relatively lower importance to values that express the motivations to follow one’s sensuous hedonistic desires, and the motivation to care about vitality. At the same time they attribute relatively high importance to sacred values both in the aspects of religion and secularity. Regression analyses results revealed an interesting issue regarding internal structure of religious life: values are related to social dimensions of religiosity stronger than cognitive ones.