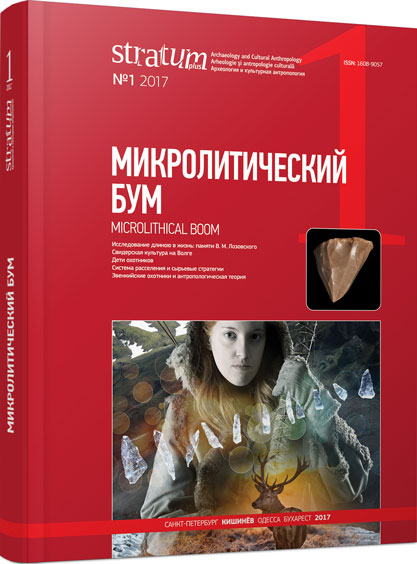 Summary/Abstract: Afontova Gora II is a Late Palaeolithic site dated between 15000 and 11000 years BP. The archaeological material is typical for the Afontova culture. The lithic industry is characterized by pebble tools and sidescrapers, as well as narrowfront and wedge-shaped microcores associated with microblade production. Raw material is dominated by small and big pebbles of alluvial origin from the Yenisei river bed (siltstone, argillite, sandstone, dolerite, quartzite, microquartzite). Big cores are not numerous and belong to either single-platform or radial types. Wedge-shaped microcores show a low level of standardization. The tool assemblage is dominated by big scrapers represented by a big variety of forms. The site yielded a number of anthropological finds, including a mandible and five teeth, which appear to have belonged to a young female of 14—15 years old. One more bone, a vertebrae, belongs to another female, who was older than 20 years. Some nonutilitarian items, such as stone beads, a decorated ivory blade and ivory disks, were found too.