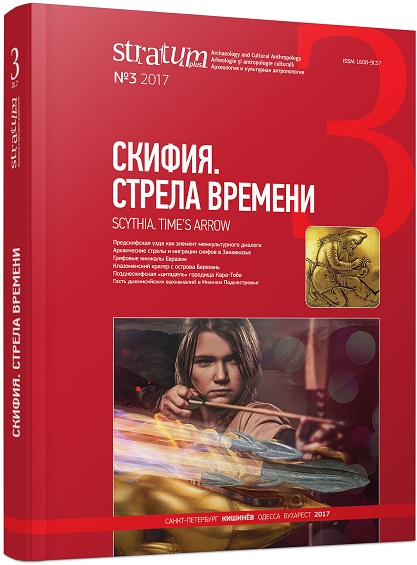 Summary/Abstract: The authors compare categories of ceramic import in the nomadic areas of Kuban and Volga-Kama region, including Volga and Cis-Urals, from the 2nd c. BC to the 2nd c. AD. Nomads of all the territories had main categories of ceramic import presented by table wheel-made pottery. However Meotian wheel-made gray clay pottery was one of the main categories of import all over the regions. Sarmatians of Kuban region and Volga Region imported and used in vast numbers Bosporan red clay pottery and Meotian wheel-made gray clay glossy pottery. However, the Sarmatians of the Volga region, unlike the Sarmatians of the Kuban region, imported in vast numbers Meotian pottery produced not only in Kuban centres but also in Don centres. This testifies the existence of as active relations with the population of the Lower Don as with the population of Kuban. Sarmatian territories of Kuban region are distinguished by wider assortment of ceramic import including the set of secondary goods. It is owed to sedentarisation of Sarmatians and their territorial vicinity to Meotian fortified settlements and Bosporan trade centres. Amongst red clay pottery the Sarmatians of the Volga region imported Bosporan pottery, while the nomads of the South Cis-Urals region imported mainly Middle Asian pottery. This tells about traditionally closer relations between the Sarmatians of the Volga region and Bosporus and between the nomads of the South Cis-Urals and Middle Asian population.