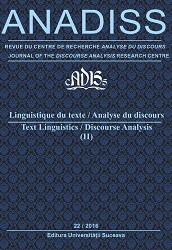 Summary/Abstract: In the travel stories, any form that embodies the presence of an entity other than the “referent" may affect actual representation of this latter. So, from this viewpoint, we clearly realize how dialogism and polyphony, by manifesting themselves in the text, are likely to disrupt the ekphrasis and its gradual development. Dialogism, whether produced or perceived, is a general and definitional principle of the language while polyphony is the effect produced on the speech by the same dialogism. The passages of the text affected by these two complementary phenomena complicate the fabric of the text and affect the reader whose goal is by nature to follow the author-traveler step by step in his journey. Therefore, in the present work we will be particularly interested in such phenomena which constitute major factors of deviation in “viaticum” texts. The lack of almost any analytical work on the viaticum texts written by French travelers who visited Iran during the nineteenth century has naturally drawn our attention. It is to be indicated that we have limited our corpus to six viaticum stories out of forty, essentially because of their completeness and chronological contiguity.