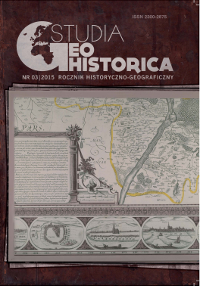 Summary/Abstract: One of the major research objectives of the series “Historical Atlas of Poland. Detailed Maps of 16th cent.” is to reconstruct the settlement network. Th e present text analyzes the methods by means of which that information was presented in a cartographic form. Within the 60 years of studies, the existence of more than 20 000 localities in the 16th century was verified, their localization, name, character (e.g. a town, a village, a milling settlement), size, kind of ownership, central functions and administrative association were established. Those data frequently contain a number of variants (e.g. varieties of names, mixed ownership, changes in time) hence they are approximate and hypothetical. Presenting such a material on a map was possible thanks to the fact that the analysis included the period of relatively good source documentation, classification of the obtained results and an abundant commentary. Reconstruction of the settlement networks in the current works is presented not only in the form of a map and a developed index but also as a spatial database linked to the edition of the most important category of sources. This makes it possible to present the richer content and better documentation of the adopted views.