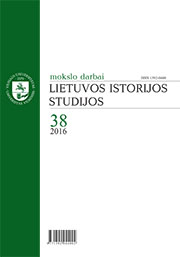 1941 M. KOVO 19 D. LAF ATSIŠAUKIMAS: PROVOKACIJA, FALSIFIKATAS AR TIKRAS DOKUMENTAS?
THE LAF LEAFLET FROM THE 19TH OF MARCH, 1941: A PROVOCATION, A FALSIFICATION OR A REAL DOCUMENT?

Summary/Abstract: This article concerns the leaflet of the Lithuanian Activist Front, dated 19 March 1941. The leaflet, titled Dear enslaved brothers! has two different versions. One version has a sentence which calls that “The traitor will be pardoned only provided he proves beyond doubt that he has killed one Jew at least”. Another version of this document does not have the same sentence, but holds a remark that it is a multiplied copy of the document. Archival resources show that the version of this leaflet with the already mentioned sentence was found in the house of anti-Soviet activist Osvaldas Žadvydas during rummaging. The interrogations of the paticipants of the anti-Soviet underground movement in Lithuania show that the leaflet came from Berlin to Lithuania on 23 March 1941. This leaflet was multiplied and circulated in various places of Lithuania. The interrogation of one of the major LAF signalmen Mykolas Naujokaitis underlines that all documentation and leaflets were sent from Berlin to Lithuania by an active Voldemarist and Head of the LAF Commission of Relations with Lithuania Stasys Puodžius. This article underlines that the authorship of the leaflet with the mentioned sentence belongs to the leadership of the LAF Berlin branch and the fraction of Voldemarists.