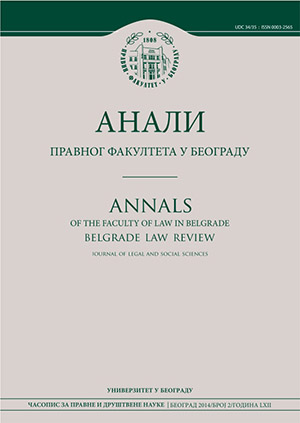 Summary/Abstract: A preferential subscription right to shares is a subjective property right of a shareholder based on which he or she has a preferential right of subscription to shares from a new issue in proportion to the number of fully paid-in shares of that class he or she holds on the date of adoption of the decision on issuing of shares compared with the total number of shares of that class. However, this right of a shareholder can be completely or partially excluded, if formal and substantial requirements for such exclusion are met. This paper focuses primarily on analysis of formal requirements for exclusion envisaged by the Serbian Law on Companies with a brief review of EU law and comparative law. According to the Serbian Law on Companies, there are three formal requirements for exclusion of a preferential subscription right: 1. shares are issued through the offer for which there is no obligation to publish a prospectus; 2. there is a written proposal for exclusion from the Board of Directors, or of the Supervisory Board if a company has a two-tier management system; 3. the exclusion is based on a decision of the General Meeting of the Jointstock company. With regards formal requirements, the paper concentrates on several weaknesses of the Serbian Law on Companies which considerably undermine the position of the so-called small shareholders.