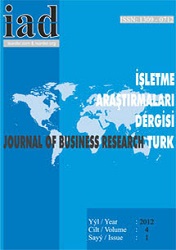 Summary/Abstract: On the subject of measuring individual performances, which considered to be one of the fundamental functions of the human resources management process, 360 Degree Feedback Performance Appraisal System (360 DFPAS) preferred for taking into account more than one aspect while providing opportunities in order to achieve more objective results. It’s been thought that the applicability of the above mentioned method is not investigated enough in the public sector where most of the employments take place in Turkey. The purpose of this study is to probe into the applicability of the 360 DFPAS on low and mid-level managers in a brigade. Within this framework, differences between the raters (manager, subordinate, peer, client, self-evaluation) have been examined and comparisons made between traditional performance appraisal and 360 DFPAS. There are meaningful differences only inner client between two different evaluation methods (Traditional manager evalution-360 DFPAS) within evaluation raters. But there aren’t any meaningful differences between traditional performance appraisal and 360 DFPAS as whole method.