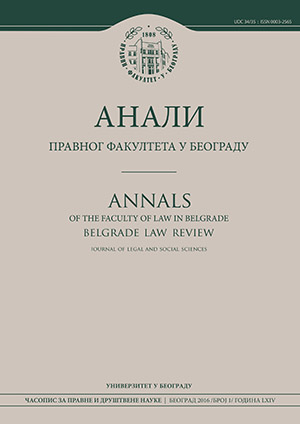 Summary/Abstract: Wills and contracts are one of the main sources for the history of the Byzantine private law. In this article we have analyzed wills that are dated in the period of XI to XIV century. Manummision of the subordinate class of slaves, parikoi and serfs is an interesting and quite frequent phenomenon in wills. In a couple of different sources, testators gave freedom to the mentioned groups of people, most often being motivated by spiritual and holy causes. Testators usually provided the best care for a new freedmаn, involving family members to bear with his education and upkeeping. In this article we are also imposing many questions that are particulary significant for the legal analysis, such as the form of manumisson, the issue of slaves who become inheritors, value and the nature of legats, etc. Manumissons could have diverse nature. In some cases we can compare it with the testamentary manumission of the Roman private law, despite of the fact that slaves in the Byzantine law were never included in the inheritance mass. The relationship between testator/master and serf can explan better the nature of enslavement in Byzantium. That union is specific, known for life-important questions and needs of freedman, which master-testator resolves.