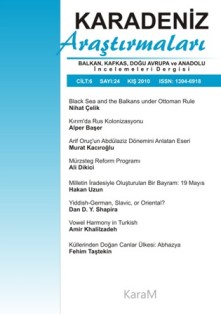 Summary/Abstract: The Anatolian Plateau and the Balkan Peninsula were the main power bases of Ottoman Empire. Ottoman conquests in Anatolia and Balkans were consequences of many factors. The decline of Byzantium, paved the way for Ottoman conquests. Thus the Ottoman Empire, ruled a significant Orthodox Christian population. The rapid Ottoman expansion was the consequence of Ottoman imperial mind. The first aim of this article is to focus on Ottoman conquests and their political and psychological aspects regarding especially the Balkan Peninsula. The Black Sea Basin was very important for the empire. There was no rival to the Ottomans in the Black Sea until the 18th century; it was almost an “Ottoman Lake”. The second aim of this article is to show the importance of Black Sea as a political and economic zone.