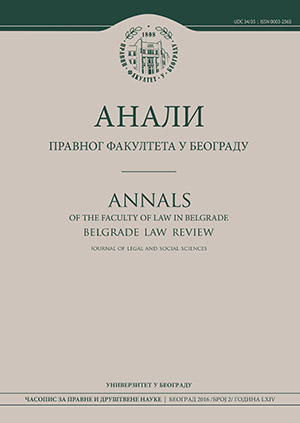 Author(s): Nikola Vuković
Subject(s): Criminal Law
Published by: Правни факултет Универзитета у Београду
Keywords: Disqualification of a judge in the proceedings for release on parole; Procedure for release on parole electronic surveillance of conditionally released; A report on the conduct of the convicted;

Summary/Abstract: The work is thematically divided into two parts that are not strictly separated. The link between these is the institution of release on parole. The first part deals with the institution of disqualification of a judge from the panel which decides on the petition for release on parole. It was noted that this issue does not occupy the attention of science, nor practice. It is pointed why this neglect is unjustified. Specifically analyzed is the possibility of participation of judge in deciding on release on parole if he has already acted (had some role) in the same case before. The consequences that can be brought by insufficient attention on this issue are as follows: 1) substantive violation of the provisions of criminal procedure, and 2) the conduct of disciplinary proceedings against a judge who should have been disqualified.