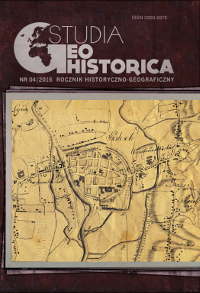 Summary/Abstract: Historico-geographical analysis of the layouts of villages in central Poland made it possible to distinguish the morphogenetic types of rural settlements characteristic of the specified historical periods. On the basis of the historical topographic maps, it is also possible to describe the features of spatial distribution of the morphogenetic types of villages for the investigated area. Central Poland presents a very diversified morphogenetic picture of villages, which results from a great number of complex historical and socio-economic processes, as well as from varied geographical conditions. Four main historical periods were distinguished, during which the following characteristic morphogenetic types of villages were established: 1. irregular medieval villages which did not undergo regulation in the Middle Ages; 2. regular medieval villages located on German Law; 3. newer settlements founded in the Modern Period (e.g. manorial layouts and villages connected with the so-called olęder settlement and Frederician colonization); 4. villages formed in the process of regulation and parcellation in 19th c. The villages form Early Middle Ages developed in an evolutionary way, were not regulated, and adapted well to the local topographic position. Among the villages with irregular habitats from this period the following types can be singled out: road villages, little green villages (small oval) and circular villages; cross-road villages and multi-road villages. The land was divided into numerous small fields, irregular in shape. The layout of fields in these villages takes the form of blocks, block-strips and irregular small fields. Two distinct processes were taking place in the Middle Ages: foundation of the new villages on the so-called in cruda radice, and regulation of the villages already existing according to the German law. These villages were built mostly on the Church land of the cloisters and bishops, as well as on land belonging at that time to the Duke. The generally accepted types of villages founded on the German law are: large regular street villages and regular green villages (with oval or rectangular square). Regular field patterns in those villages were organized in the open-field patternadapted to the three-field rotation system. Within the group of villages of later origin, established between the 16th c. and the 1th half of 19th c., the following types were distinguished: manors and marshy row villages (the so-called olęder or Frederician colonies and other colonies – the so-called forest settlements). In Modern Period one can identify mostly the manor-peasant village with a complex of manor buildings and peasant homesteads. Manor and peasant fields intermingled and were cultivated by means of the three-field system. Rarely can one observe manor villages which included only the manor complex with crofters’ small holdings and where fields were consolidated into large blocks. In the 18th c. planned villages were built again, which was connected with the Frederician and the so-called olęder colonization. Marshy row villages located on clearings can be distinguished, which represented a different spatial pattern with regard to the economic functions of their population. Agricultural colonies were mostly regular street villages, densely built-up. The pattern of the fields took the form of regular, schematic, broad stripes, belonging to separate owners. The 19th c. marks the turning point in the development of the forms of rural settlement. The ancient spatial settings of villages have changed mostly in connection with the transformation of the socio-economic life of the countryside, in particular the enfranchisement of peasants, the parcellation of manors and field consolidation, the disappearance of the threefield rotation system, and the introduction of new techniques of cultivation. In the manor- peasant village one can observe the process of separation of manor and peasant land. In the context of parceling-out it is possible to distinguish row villages with fields in the form of ownership stripes, perpendicular to the road and dispersed settlement with block system of fields. The irregular layouts of villages from the Middle Ages were formed mostly in the peripheries of central Poland, in the valleys of the Warta, Bzura and Pilica rivers. Compact settlement regions of regular villages, founded during the medieval colonization, have been identified in the area of former ecclesiastical or royal estates where proprietors were interested in location of villages based on the German law. Manors developed mainly inside the villages, and they did not form separate settlement units and morphogenetic zones. Forest colonies and marshy row villages appear as small enclaves throughout the whole investigated area, especially in the central part of region, because they were mostly founded on clearings, areas not cultivated before, on poor soils and in forests.