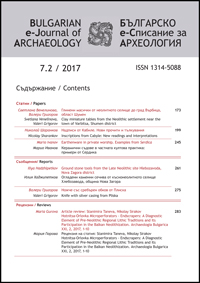 Summary/Abstract: The article proposes revised reading of several inscriptions from Cabyle. Two Hellenistic fragments are shown to belong to a decree honouring Kriton, son of Euma[chos] or Euma[res], who was put in charge of the city or the neighbouring territories and provided many great services to the citizens. Two alleged mentions of Celts(Γαλά[ται]) in Hellenistic fragments are proved to be misreading. In two inscriptions of AD 135-136, the nomen of the provincial governor ---rius Fronto is reconstructed as Cavarius. A consular date corresponding to AD 208is restored in an inscription for the construction of a temple for Jupiter Optimus Maximus Dolichenus, which provides a date for the governor of Thrace Q. Egnatius Proculus. Several inscriptions are shown to mention military officers – a prefect, a centurion, and a duplicarius. A fragment erroneously thought to belong to a funerary monument is now read as a dedication to Phoebus and is identified as a fragment from a statue of the god.A Greek inscription, which was only partially read and incorrectly dated to the first half of the third century, infact belongs to the period of the First Tetrarchy and documents the building of the fortifications of Cabyle under the governor Domitius Domninus in AD 297. Another inscription, from the time of the Fourth Tetrarchy (AD309-310), is about the construction of a gynaeceum (state textile workshop), being the only such inscription hitherto found on the territory of the Roman Empire. The two tetrarchic inscriptions also reveal the new status of Cabyle in that period – previously a military camp (castra), it was raised to a city, with the title “the splendid city of Cabyle” (ἡ λαμπρὰ Καβυληνῶν πόλις). The main magistrate of the new city was the λογιστής (= curator civitatis),and the first members of the city’s curia were called δεκάπρωτοι (as a translation of the Latin decemprimi).