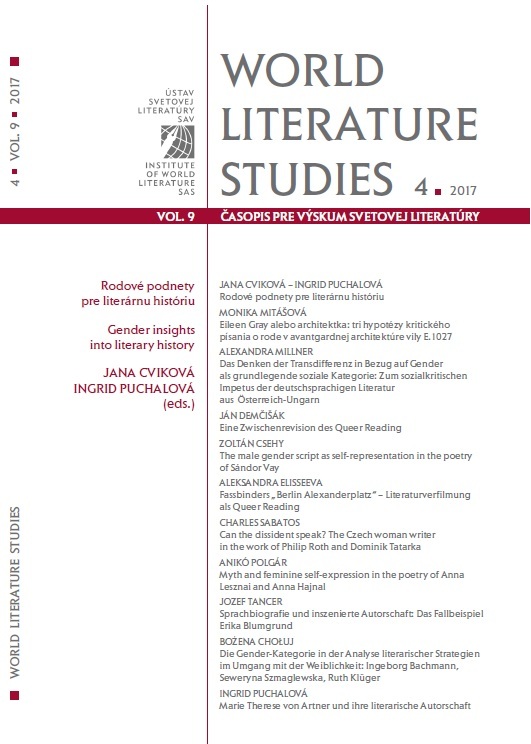 Summary/Abstract: The Czech dissident movement that began in the late 1970s was a network in which women played a key role, but the Czech writers who gained fame in the West were invariably men. In Philip Roth’s 1985 novella The Prague Orgy, his alter ego Nathan Zuckerman meets a woman writer named Olga, whose pursuit of the American writer owes more to erotic fantasy than to the milieu Roth recreates in otherwise faithful detail. This portrayal of the Czech female as both sexualized and “other” can be traced back to twentieth century Prague-German writers,but Roth both politicizes and intellectualizes this archetype by making the desiring (rather than desired) woman a writer and dissident. A real-life perspective on the Czech disidentka (female dissident) appears in the work of Dominik Tatarka, one of the few Slovak writers tobe closely associated with the dissident movement. The last work Tatarka published in hislifetime was a memoir based on tape-recorded interviews with Eva Štolbová, who became Tatarka’s connection to Prague dissident circles. In 1988, these Navrávačky (Tapings) were published in edited book form in Germany, and it was not until more than a decade later that the full transcripts were published in Slovakia. While the female Czech dissident is eroticized in this text as well, Štolbová is not a mere object of desire; she portrays her side of the story inher own memoir, Lamento (1994). The gender dynamic between Štolbová and Tatarka subverts the cultural assumption in which the Czech language was constructed as “masculine”and Slovak as “feminine.” Thus both Roth and Tatarka illustrate the interplay between “otherness”and gender in the production of dissident culture, and its reception by domestic (both Czech and Slovak) as well as international readers.