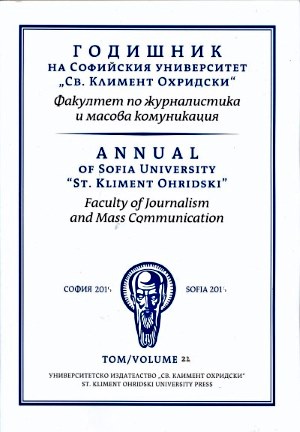 Summary/Abstract: The text analyses different samples of print advertisements – dating from 19th to 21st century –released with a newspaper or a magazine as their key visual.The choice of the press as an advertising symbol has its own historical premises and it is often associated with significant social changes around the world – shifting of values, power and politics. And the presence of such an image (either a central print visual or not) defines the time and the social context responsible for the creation of any thematic print advertisement. It all makes sense, having in mind the main purpose of advertising, i.e. to reach the consciousness of a certain segment of users. So a research of the print advertisements with their verbal and visual messages in point of fact is a study of the social reality, values, habits and the overall attitude towards their development in future.