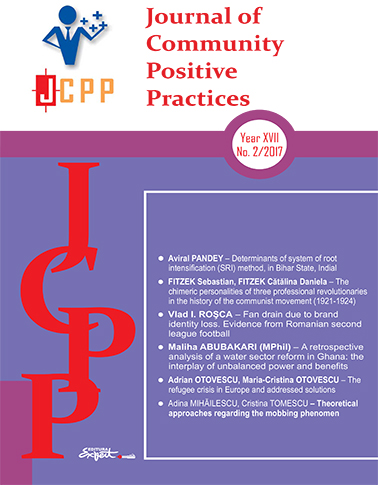 Summary/Abstract: "Fan drain" is a term used to describe the loss of stadium-goers suffered by a sports club. While there are many reasons why supporters turn their back and walk away from the terraces (e.g. better entertainment alternatives, poor sporting performances, too high admission costs etc.), this research focuses on one of the problems that Romanian football was confronted with lately: the loss of brand identity. Many football clubs, rich in tradition, went bankrupt and were dissolved, part of Romanian football's history disappearing with them and, at the same time, important groups of fans who suddenly faced a situation where they didn't have a club any longer for which to cheer for. Some other clubs, even if still existing, were relocated to other cities due to the loss of support (mainly financial) that they had once enjoyed in their places of origin. The relocated clubs were separated from their fans, while the people in the new places of destination did not show any particular interest in adopting the "alien" teams. A decline in stadium attendances was one of the consequences. The research uses four brand conveyors (tools through which brand meaning can be created for a football club) as independent variables and correlates them with a dependent variable (match attendance) to run a regression analysis that aims to find out whether the creation of brand meaning and its transfer towards the fans can combat the decline in attendances. Romanian Second League football has been chosen as a sample. Results indicate that focusing on sports marketing tactics, such as offering match programs, selling admission tickets or improving PR activities can facilitate the process of neutral fans to adopt "alien" teams, can help football brands with low or no identity to easier relate with (new) fans and, overall, can increase match attendances