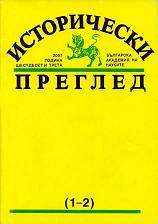 Summary/Abstract: The article outlines Krustyo Rakovski’s road to the Soviet Golgotha and examines how the political and socio-psychological situation in the conditions of the general hatred and hysteria during the trial against the anti-Soviet Trotskyist-Zinovlev centre and the real threat to his life compelled Rakosvki to capitulate. On the basis of the NKVD archives in the article are indicated data on the outrages on Rakovski during the investigation, his testimonies which are full of .ambiguity. and inner contradiction are analysed. In time they assumed a tragic grotesqueness in the part of the absurd .confessions., the hot refutations and the further .dialogues. with the investigators. The author stresses that the same character of the testimonies was inherent also in the whole judicial farce of the trial of the .right-wing Trotskyist bloc. (March 1938). For the first time are cited documents referring to Rakovski’s stay in the Soviet prisons in Sol-Iletsk and Orel and his execution on Stalin’s order on September 11, 1941.