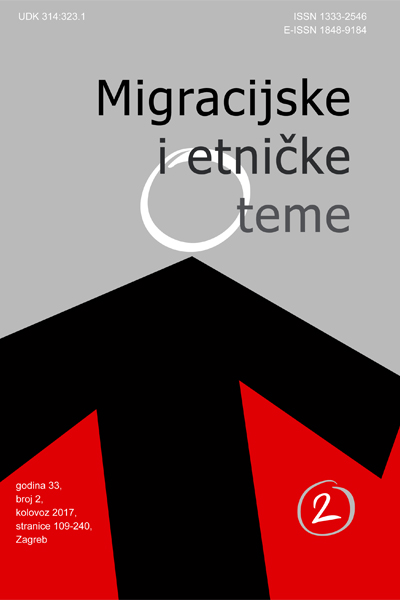 Summary/Abstract: The “European refugee/migrant crisis” is a geopolitical designation with which the media, politics and the general public have labelled the arrival of a large number of refugees into the European Union in 2015 and 2016. The article analyses the spatial distribution of asylum seekers in the European Union during the 2011–2016 period. It focuses on how changes of the border regimes on the external and internal borders of the European Union have influenced the movement of asylum seekers and the spatial distribution of asylum applications during the “crisis”. It raises attention to the growing importance of the militarisation of borders and the securitisation of migration flows for the spatial distribution of the asylum applicants. The research is based on the analysis of the Eurostat data on the total number of asylum applicants in member states between 2011 and 2016. Although changes in border regimes were not the only factor influencing the spatial distribution of asylum seekers during the “European refugee/migrant crisis”, their effects can be used to demonstrate the restrictions asylum seekers are facing on their journey. The main aim of the article is to reflect on the use of the geographical designation “Europe”/”European” in the context of the “refugee/migrant crisis”. Using this designation creates the perception of a unified, borderless space, in which individuals can freely choose their asylum destination. The discourse of “the European refugee/migrant crisis” often presents the European Union as “an open asylum shopping centre” in which asylum seekers can pick whatever host they want. The article opposes this notion and emphasises the limitations and the effect that contingency plays in the choice of asylum destination.