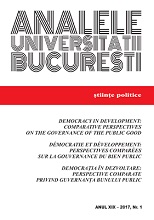 Summary/Abstract: Policy congruence is one standard for the measurement of a good democracy. It is one of the normative conceptions of democracy that elected politicians act in accordance with the preferences of the electorate. Although an undisputed tenet of democracy, its measurement is fraught with limited interpretations of acting for, or mirroring citizens’ preferences. This study investigates the congruence of policy stances of members of parliament with citizens in Poland. With the passage of time MPs and citizens will converge with their preferences on socio-cultural issues while on identity topics divergence is more likely to be the norm. I draw from democratization theories that claimed that, in time, the quality of democracy would improve. I test this hypothesis diachronically using surveys of citizens and members of the Sejm, the Polish lower chamber of representatives, starting in 1997 to the election of 2011.