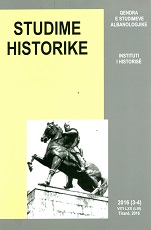 Summary/Abstract: The diplomat August Ritter von Krai has been the main actor of Austria - Hungary in the Albanian territories. This article on his contribution begins with notes on the reconstruction of the political field.Then it deals with the main activities of Krai in Albania concerning the topics as follows: The Congress of Alphabet in Manastir in November 1908, the action for Albania in 1908 -1909 against Montenegro, the rebellion of 1914 in Middle Albania, the action for Albania in 1914 against Serbia and Montenegro, the Albanian Literary Commission of Shkodër in 1916 -1918, sending of ancient monuments to Sarajevo or the building of an Albanian national museum and the command of the corps against Krai in 1918, the argue on the separation of the civil commissary’s agenda from that of the Ministry of Foreign Affairs’ representative.In the end, you find the analysis on Krai’s activity in Albania according to Pierre Bourdieu’s praxeology referring to crucial terms: economic capital, cultural capital, social and symbolic one, as well as an analysis of the circle of friends and connections of Kral.