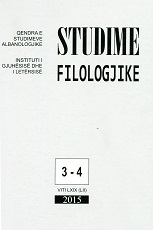 Summary/Abstract: The article treats the contribution of prof. Jorgji Gjinari, one of the most prominent Albanian dialectologists in the study of Albanian dialects, focusing on his major work “The dialects of Albanian language”. After emphasizing his contribution in the descriptive study of several Albanian varieties, either from Gheg or Tosk dialect, as well as his merit in defining the division of Albanian dialects, the article focuses in the second phase of the Albanian dialectological studies, related to the need to further expand the study in two directions: on the one hand, to explain the reasons for specific dialectal phenomena and on the other hand, to achieve a greater generalization of dialect phenomena in order to highlight the common features of Albanian dialects and to bring forth the unity of the Albanian language. This is the claim that Jorgji Gjinari supports in his work “The dialects of Albanian language” published in 1989. This work was a state-of-the-art of the work carried out to date on the Albanian dialectology research not only by the author himself but also by other dialectologists. This work marked a qualitative leap in the study of Albanian dialects, because it implemented a new method in the field of synchronic studies of Albanian, the structural-functional method of the Prague School, which began to be utilized in Albania in the 70s. According to this method, in the course of the study, every dialectal phonetic feature is viewed within the language system and analyzed for their structural and functional aspects, by considering their functional value within the respective dialectal systems. The author has also applied the same structuralist method to the study of the morphological differences of Albanian dialects, which remains a pioneer work in our grammatical studies. The author has also paid attention to the diachronic study of the main dialectal features that differentiate Albanian dialects. The study focuses on some of the more important dialectal phonetic phenomena that have occurred in the history of the Albanian language, such as the opposition of nasal vowel in Gheg vs accentuated /ë/ in Tosk, the opposition of the vowel after their length, the accentuated vowels /i/ and /y/, the vowel clusters /ua/, /ye/, /ie/, the rhotacism in Tosk, the palatal consonants /q/ and /gj/, the consonant clusters /kl/ /gl/ and some other historical phonetic phenomena in consonant clusters in Albanian. The study also tackles the tricky and still unresolved issue of the origin of the division of Albanian dialects. This is one of the rare attempts in Albanian linguistics that provides an interdisciplinary view of the dialectal change associated with the history of the people.