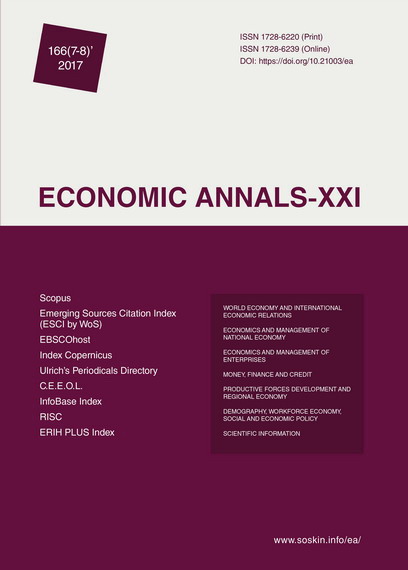 Summary/Abstract: The article revises existing channels of monetary policy transmission due to obvious changes in the macroeconomic environment, as well as in the patterns and efficiency of conventional channels. Under the present conditions in Russia, the widely used interest rate channel is being replaced by the credit channel, which is thought to be more effective in facilitating or slowing down the economy. Yet, the credit channel is understudied, also because it is a relatively new phenomenon for those who study the Russian economy. The paper introduces the concept of credit channel breadth (a term is proposed by the authors) measured as a relative extent of credit availability and affordability to the real sector enterprises. It provides quantitative measuring of the dependence of the credit channel breadth on changes in monetary policy due to which appropriate models are derived. The application of distributed lag and vector autoregression models on the basis of annual (1998 through 2016) and monthly (April 2009 through April 2017) statistical data established that changes in monetary policies affecting the money supply (M2) have a positive impact on the volumes of loans issued to enterprises, as well as on the net change of flows and transfers on debt. The most sufficient were 2-month and 10-month lags after quantitative easing or the so called credit squeeze when the credit channel breadth increased or decreased, respectively.