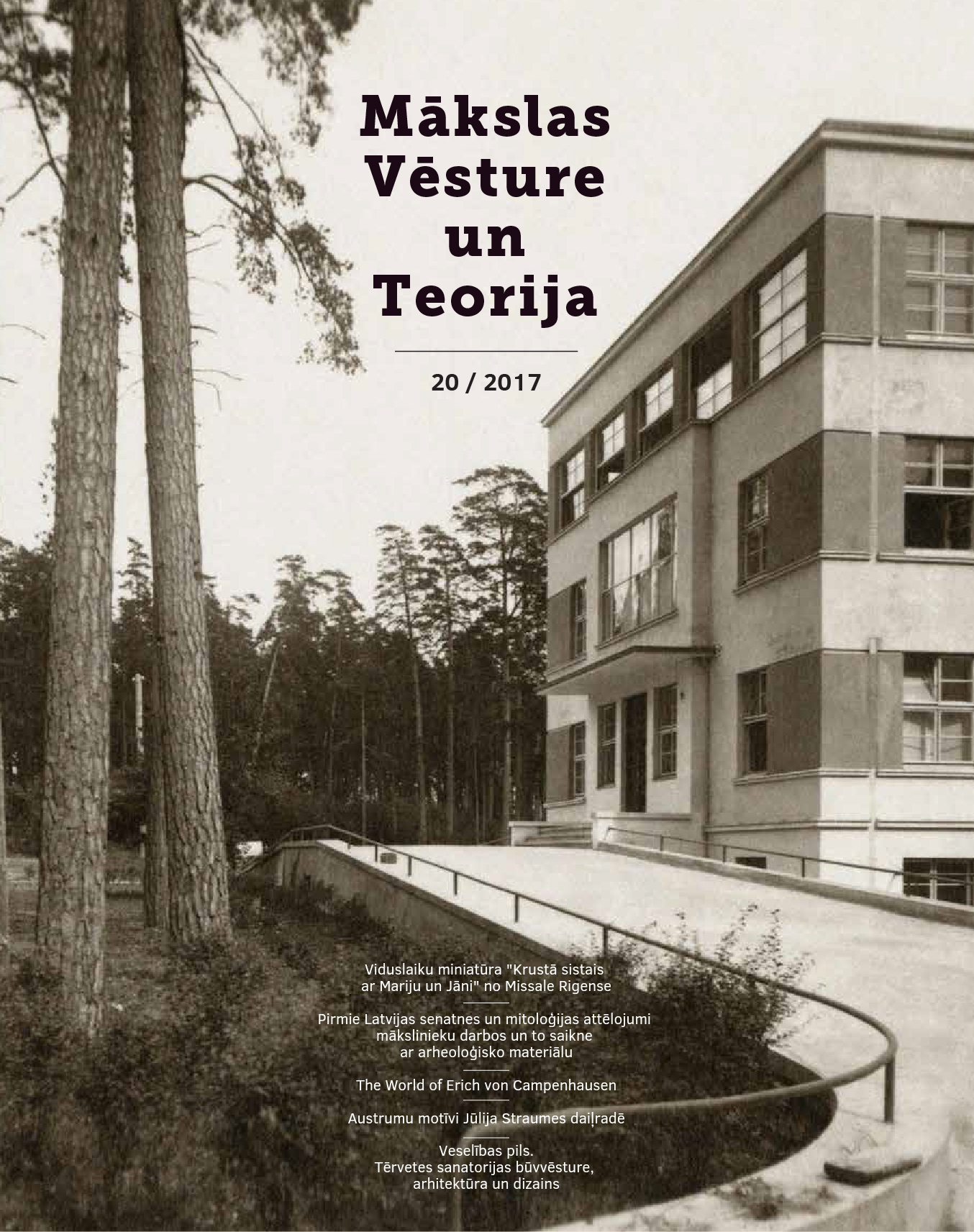 Summary/Abstract: Textile artist Jūlijs Straume (1874–1970) is one of the leading masters of Latvian applied art. He is widely known for his richly ornamented textiles and attempts to introduce in Latvia the technique and traditions of Persian carpet weaving current in the Near and Middle East. Up to now, researchers have usually focused on the ornaments resembling Latvian textiles as well as patterns and stylised natural motifs composed by the artist himself. Straume has been praised for his ability to use vernacular ornaments in the carpet weaving technique not typical for Latvians. Oriental motifs in the artist’s output received less attention while carpet making traditions and historical legacy unavoidably influence their design and the use of ornament. Straume undoubtedly drew inspiration while collecting, collating and restoring sketches of traditional carpet designs of the Caucasian peoples. This Oriental influence was noticed but often depreciated.In 1925, two Oriental-style carpets made after Straume’s designs received the gold medal at the International Exhibition of Modern Decorative and Industrial Arts in Paris. One of them complies with the traditions of Georgian vernacular art but the other, made in collaboration with the Georgian artist David Tsitsishvili (1901–1986), was made in the style of the Safavid dynasty (1501–1736). One of the works awarded in Paris is the carpet “Miri” (1925) that, according to some researchers of Straume’s work, was titled with the Georgian term for the totality of technical and stylistic means of pattern making in the Persian technique. The carpet is filled with stylised floral ornaments in a grid-based composition known in the Caucasus as shabaka. This kind of filling is widespread in both Caucasian and Persian carpets. The “Miri” carpet stands out with its artistic and technical execution even among traditional Caucasian and Iranian carpets. It demonstrates that a complete composition of motifs can be assembled from simple elements. The other Straume carpet awarded at the 1925 exhibition is known by two titles: “Jungle” and “Hunt” (1924). This item fully complies with the canon of the Safavid dynasty’s court carpets and is especially lavish and artistically valuable. It belongs to the group of animal carpets that emerged in Anatolia in the 14th century. While working on the design of this canonical example, Straume studied animal carpets in depth, mastering the style, composition, colour range and symmetry of court carpets as well as traditional animal and floral motifs. There is documentary evidence that particular attention was paid to the “Emperor’s Carpet” held by the Museum of Applied Arts in Vienna. In line with the accepted canon, the main field is fiery red. The life of wild animals is depicted on a background of floral motifs. Stylised floral motifs – arabesques – are placed all over the field and used as a basis for various flower motifs. Dividing the field in four, it is evident that the animals in each part are symmetrical mirror images of the creatures in the adjacent quarters. The carpet’s composition is based on detailed mirror symmetry along both the vertical and horizontal axes. Each quarter is quadrupled, creating a double mirror image. The making of such a carpet demanded perfect skills from the artist as well as the weaver. Unlike with other symmetrical carpets, in this case whoever created the design had to make the technical drawing for the entire carpet. In the field of the carpet “Hunt”, the artists have included several lions stalking antelopes. Near the central medallion, there is a dynamic battle between a leopard and a fallow-deer. Another leopard observes the struggle from a distance. Several lynxes and pheasants are also seen in the main field. Ornamental motifs and blocks in the carpet “Hunt” are rather similar to another of Straume’s works – an Oriental-style stationery box. The surface of its cover resembles a traditional medallion-based carpet. The background of the cover field is wine-red and contains the compositional block of a kitabe medallion whose central part is filled with symmetrical double islimi patterns and arabesques. This ornamental block is completely identical to the one seen on the main border of the carpet “Hunt”. The box cover features two closed compositional blocks and kitabe along the longitudinal axis in both directions from the medallion and perpendicular to it. The artist has depicted mirror images of paired birds in the centre of both blocks on a background of arabesques and flowers. Two bashlyg (gubpa) blocks conclude the medallion’s composition along the longitudinal axis. Yet another two stylised pairs of birds are placed in the cover corners. A drawing on the inner cover helps to recognise the birds painted on the outer part. The pair of birds here represents the unmistakably most beautiful motif in Oriental art – the mythical bird called Simurg. The image of this bird has been widely used already in the art of the Sasanian dynasty (224–651). Detailed analysis of the prize-winning carpets and the stationery box confirms the artist’s wide-ranging knowledge of Oriental ornaments, their traditional motifs and blocks, their origins and symbolic meaning. The article has only just begun to explore Straume’s original works of his Caucasian period, and it is already clear that the output of that time, so significant in his life, is artistically no less valid than the works created in Latvia. The study of this subject deserves to be continued as researchers have so far not turned to ethnographic drawings as well as a large part of Straume’s legacy created under the influence of traditional Oriental art.