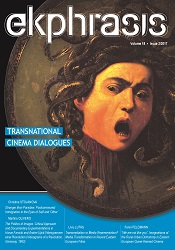 Summary/Abstract: This paper explores the dichotomy between rural and urban spaces as represented in Eastern European queer-themed cinema. The analysed films (Land of Storms, Beyond the Hills, In the Name of, The Country Teacher, Go West) imagine and construct the countryside as a conservative, patriarchal and heteronormative space, while the city is depicted as enlightened, liberal and tolerant, which dichotomy is parallel to the film’s imagination of the West- East opposition. Furthermore, the films attach a value hierarchy to the binary opposition they create, in which the liberal Western thought is positioned as superior, and is adopted by the films themselves. I argue that the complex and multiple nature of the rural-urban dichotomy points to multilayered marginalising and self-colonising strategies present in Eastern Europe, in which sexual and spatial marginalisation is intertwined. By ignoring the stratified nature of urban and especially rural complexities, the films and their queer characters construct the latter as the other of the city and along with that, the other of Western liberalism as well. Furthermore, when the artificially separated layers of space inevitably collide, this crash usually and repeatedly leads to tragedies ranging from repression of sexuality to violent deaths. I point out in the last part of the text how these clashes of value hierarchies also refer to crises of certain values which are represented by dysfunctional father figures and families.