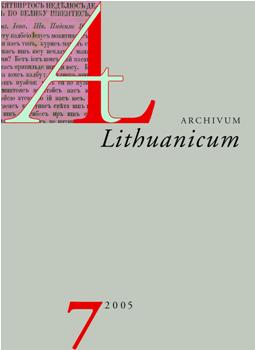 Summary/Abstract: This article deals with the manuscript Purpura iszganima mukos Jezusa, which was compiled in the North-Western Lowland Lithuanian dialect. The title page bears the year 1707, but basing myself on the linguistic data I attempt to prove that the text was composed (or reedited) only after the middle of the nineteenth century or even slightly later. Along with the salient graphic peculiarities that show such a late origin of the manuscript, certain linguistic features which are different in the other Lowland Lithuanian book (based on the same dialect) Ziwatas Pona yr Diewa musu Jezusa Christusa (1759) prove this to be a comparatively late version of the manuscript Purpura: 1. The morphological alternation of [t], [d] : [è], [dþ] is almost totally absent in Purpura; in Zywatas this process was still in the embryonic stage of development. 2. In Zywatas the sound [e] was consistently used in unstressed word-stem and inflectional positions. In Purpura the shift can be traced as it progresses very clearly: -e- ´ -¼-, -e ´ -¼. 3. In certain cases the cluster [nî] was more than just nasalized, it was actually turned into [nán] in Purpura. Yet the same cluster [nî] in Zywatas was always kept unaltered. 4. Certain archaic morphological features were absent from the manuscript; yet they were present in Zywatas. Note for instance, the loc. pl. ending -su and also such archaic forms of the consonantal declension as the instr. sg. sesermi '(with) sister', instr. pl. sesermis '(with) sisters'h, etc. At the end of the article certain strong arguments are advanced to demonstrate that the linguistic basis of Purpura was the subdialect of Kretinga of the so-called littoral Lowland Lithuanian dialect.