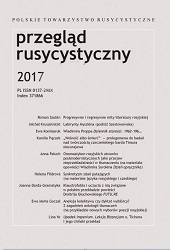 Summary/Abstract: The article discusses the range of important changes, which occurred in the fantastic genre in both Russian and Polish literature since socio-political transformations of 1980s and 1990s. The author notices that there is a strong tendency to blend established genres and mix different styles in the fantastic. In addition, so-called hard science fiction, concerned with social consequences of scientific and technological revolution, which for a long time occupied a privileged position within the genre, gives way to other variations, most noticeably fantasy, alternative history, social science-fiction, post-apocalypse fiction, and horror. Despite similarities in Russian and Polish fantastic literature, some of the Russian-specific genres do not appear in Polish fiction. This includes, for example, imperial and Orthodox fantasy. On the other hand, the genre of liberpunk attracts many Polish writes, even if the name of the sub-genre does not function in Polish literature.