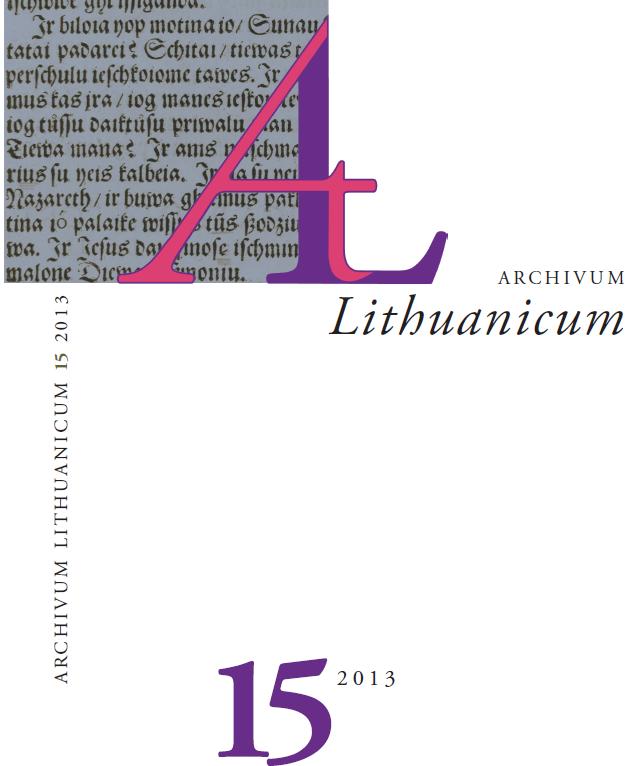 Summary/Abstract: In this article we describe a copy of Jonas Bretkūnas’ Postil (BP; 1591) that since August of 2012 has been kept in Yerevan, in the department of Lithuanian books in the Matenadarane institute of the old manuscripts of St. Mesrop Mashtots. This is one more BP copy that has not been included in the Lithuanian Bibliography (1969) and its Supplements (1990) so far. The copy was known before WW II , but later considered lost. Analysis of the ownership marks demonstrates that this copy between the end of the nineteenth century and World War Two was kept in three libraries in East Prussia: (1) Library of the Lithuanian Literary Society (Litauische literarische Gesellschaft) in Tilžė (Tilsit), up to 1892; (2) East German Homeland Service Library in Tilžė (Ostdeutscher Heimatdienst Tilsit), after 1923; (3) Library of the Baltic and Slavic Seminar in Königsberg University (Baltisch-slavisches Seminar der Albertus-Universität Königsberg Pr.), after 1936. It was acquired by the Library of the Lithuanian Literary Society at the period when the national movement was gaining power in Lithuania Minor, and which aimed at preserving the endangered Lithuanian language, literature, and culture as a source for scholarly research. The books of the Library of the Lithuanian Literary Society were acquired not by Tilžė Town Library as it was assumed so far, but by East German Homeland Service, a German organization which had nothing to do with Lithuanistic activity. It was this organization, not the Library of the Lithuanian Literary Society, which from the books were transferred to the Baltic and Slavic Seminar in Königsberg University where they were used for teaching and research purposes. The BP copy was also transferred to the Baltic and Slavic Seminar in Königsberg University as a source for the study of the language.