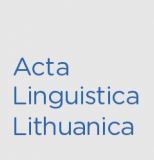 Summary/Abstract: The first complete translation of the Bible into Lithuanian from the end of the 16th century by Johann Bretke contains many complex units (idioms, proverbs etc.). Regarding biblical phraseological units it is important to distinguish between two categories: 1) units, which go back to biblical idioms; 2) units, which go back to certain situations. One of the efficient methods to investigate idiomatic expressions in ancient translations is described by Harald Burger in his Handbook of Phraseology. Among other things, he pointed out the following type of equivalence of idiomatic usages: “source language: a word – target language: a phrase”. In Luther’s translation of the Bible a single word can correspond to a prepositional phrase in the translation of Bretke. Phraseological units often occur in different variants. Finally, I mentioned examples of phraseological units with the function of sentences like the greeting formula.