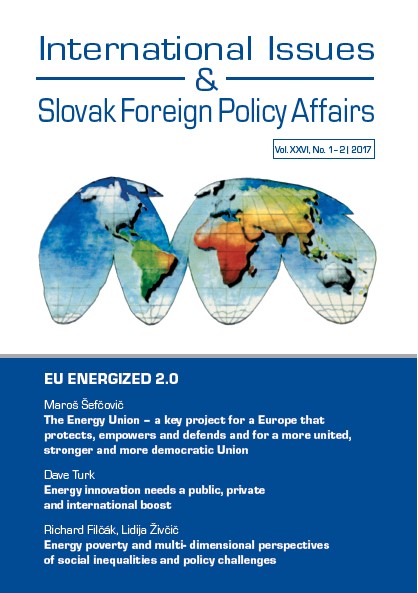 Summary/Abstract: All European citizens should have access to secure, sustainable and affordable energy. This is the primary objective of the Energy Union, one of the key priorities of the current Commission. This objective can only be achieved through a fundamental transformation of our energy system. In such a system, energy would be used efficiently in all economic sectors, low-carbon conversion technologies would generate electricity along with heating and cooling for homes and industries, and renewable fuels would be used for transport as an alternative to liquid hydrocarbons. This transformation of the energy system will bring additional benefits: the fight against climate change will become more effective and new business opportunities will be created, driven by the need for new services and technologies. The success of this transformation depends largely on the effective development and commercialization of low-carbon, low-cost and high-performance energy technologies and their integration into all facets of the energy system. To meet this challenge, research and innovation (R&I) has become one of the five priorities, or dimensions, of the Energy Union strategy. Placed at the core of the EU’s overall energy and climate policy since its launch, the SET-Plan this year reaches a milestone – its 10th anniversary. During this period, it has contributed to boosting low-carbon energy innovation by triggering an increased alignment between public and private, European and national research agendas. Technological roadmaps and strategic targets helped maintain a focus on priorities, while new structures and processes stimulated cooperation and the pooling of resources. During these ten years, the SET-Plan has been a reference point for Europe's R&I policies at the national and EU levels. The SET-Plan will also play a key role in the completion of the Energy Union, by supporting efforts to develop national energy and climate plans for the implementation of the Energy Union’s 5th dimension. The SET-Plan will continue to function as a cornerstone of Europe's energy system transformation to a low-carbon and sustainable, smarter energy system for the benefit of European society.