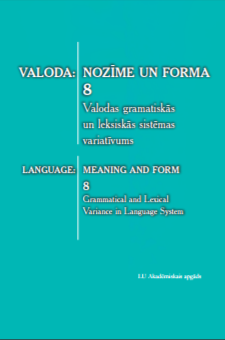 Summary/Abstract: Baltic philologist Edīte Hauzenberga-Šturma (1901–1983) worked both in linguistics and in the field of folkloristics. Being still a student of the University of Latvia, she started work at the Archives of Latvian Folklore where her duties from 1927 until 1936 were to organize collecting of regional words and place-names. In her folklore collection, LFK [714], there are 478 folklore units altogether recorded in Kroņvircava, Liezēre, Mēdzūla, Riga, and Auleja. Part of the material is written in a phonetic transcription. After the World War II, Edīte Hauzenberga-Šturma lived in Germany. Her scientific experience both in linguistics and folkloristics was well-known in society, and it led her to a new stage of work life which was very noteworthy for Latvian culture. She was asked to join the editorial team of the new edition of Latvian folk songs, „Latviešu tautas dziesmas” (Copenhagen: Imanta, 1952–1956, Vol. I–XII). She was the linguistic editor of the volumes who proofread both literary and various dialectal texts of Latvian folk songs. The complicated edition required four years of intensive work, still, the published volumes were of great importance for Latvian diaspora since they provided easier access and research opportunities to a part of riches of Latvian folk songs. In exile, Edīte Hauzenberga-Šturma devoted herself to educational work with university students. First at the Baltic University in Hamburg and Pinneberg (1946–1949), and later at the University of Bonn, besides the Baltic languages she taught the stylistics of Latvian folk songs. She also carried out several studies on the linguistic issues of Latvian folk songs.