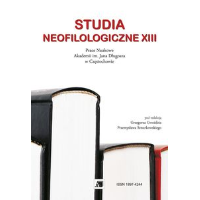 Summary/Abstract: It is the intention of the following paper to delve into the problem of the progressing radicalization of the American political discourse from the perspective of linguistic, cultural and political studies. I will probe into the rhetorical coarseness and specious persuasive strategies of Donald Trump’s discourse, for he has taken the American political scene by storm. The issues related with popular entertainment, culture of the new anger, political correctness or hate speech, together with their social ramifications, will be taken into scrutiny. It remains beyond doubt that the quality of public and political debate has a tangible effect on the society as a whole, which is why it is necessary to understand rhetorical manifestations of the latest trends in public discourses as well as their aftereffects.