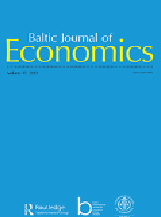 Summary/Abstract: Belarus currently has a relatively generous pay-as-you-go pension system, but population aging coupled with recent problems with economic growth will soon make it unsustainable. We build a rich overlapping generation model of Belarusian economy, which shows that without reform the Pension Fund will run into persistent and growing deficit, which will reach 9% of GDP by 2055. We also compute the fiscal projections of several parametric pension reforms, including the reform which will start in 2017. To avoid a deficit without reform, pension benefits would have to be substantially reduced. The increase of retirement age to 65 for both genders has a strong positive effect on sustainability of the pension system and keeps the deficit below 2% of GDP.