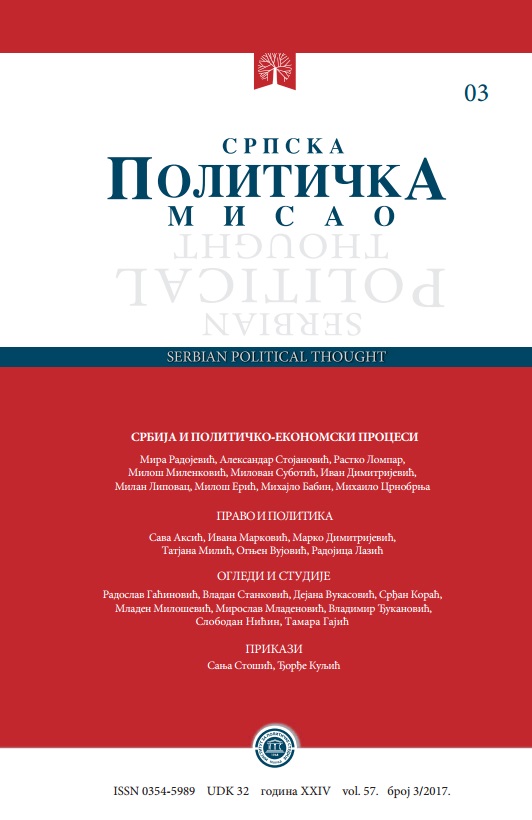 Summary/Abstract: Originally social subsystems were not differentiated as a whole. Legal and political system were not defined and decisions to manage society, both in internal and external relations, were based on social superiority of its maker. Characteristics of state in which exists and functions legal system, is security status of citizens due to the predictability of the system norms, while, in relations which are regulated by political decisions there is no security status of citizens due to the fact that there could be different political acts in two of the same relations. Therefore, as long as there is possibility that the existence and function of the system is threatened by decisions of political authority, it will not be possible to achieve a significant level of legal security. The first and basic level of realization of the idea of the rule of law implies a restriction of administration in relation to the judiciary, and that, limitation in terms of the institutional impact of administrative – political bodies to judicial bodies, primarily in terms of the formation of the judicial authorities, as well as a limit in terms of the concept of administrative–political authority, ie. in terms of possible legal regulation of their work. Freedom in the work of political authority must not exceed the necessary level, and must be limited to levels below which would present level of development of the state and society policy would lose its sense of social self-regulation system. Thus, the restriction policy, and to do the necessary levels is the condition of modern country, because the situation undefined border policy is the first and basic stage of endangering the rule of law, and if such an ideological concept and add more real this fact, especially political power that the political authorities have in total absence of other control systems, such as morality, and especially political morality, autonomy of the legal system, and therefore the rights of citizens, will be compromised by politics. And the border between politics and the law must be established in a way reduce the number of relationships that are regulated by the political administration, and moved to the area of law, to the level at which legal security of citizens could not by policy to be compromised, but at the same time performance political regulation of society, by this this is not called into question. Given that the political regulation of society in the necessary extent still necessary, the success of the functioning of the social system, when it comes to respect law and policy, we believe the only possible way to legal restraint policy. The final resultant of this process would, therefore, consisted in the fact that the policy is necessary to be replaced by law to a certain evel, and necessary would be one level below which the policy ceased to exist as an independent way of regulation. This is the limit that would determined for each group of relationships specifically. And, given that the legal security of citizens can be provided by condition in which their social and economic status is ensured by the existence and functioning of the legal system, the interference of political authority is necessary to limit, that is to reduce to a necessary minimum. That can be done most efficiently through constitutional norms, as the highest, and as the norms which the adoption or change, executive authorities can not influence.