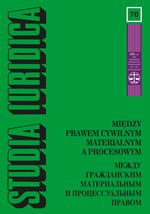 Summary/Abstract: In a recent judgment in ERGO Poist’ovňa, a.s. v Alžbeta Barlíková, the Court of Justice of the European Union attempted to clarify the ambit of Article 11 of Council Directive of 18 December 1986 on the coordination of the laws of the Member States relating to self-employed commercial agents, that is the circumstances where a commercial agent’s right to remuneration may be extinguished should a negotiated transaction not be executed between the principal and the client. Notably, the Court held that in the event of even partial non-execution of a negotiated contract between the principal and the third party client, provided it happened due to no fault on the part of the principal, the agent’s right to commission is proportionately extinguished. The paper discusses the judgment in the light of previous CJEU case law and the Polish transposition of the said European standards with a view to finding any potential divergences between the two. The paper notes two problems. First, Polish law, as opposed to Slovak law, does not recognize an automatic termination of an insurance contract in the event of default on the part of the customer. Conversely, whether such an effect eventuates is left to contractual discretion of the parties. Second, Polish courts have been recently willing to substitute unjust enrichment for contractual liability even where, it appears, complainants have valid claims under Article 7614 of the Civil Code.