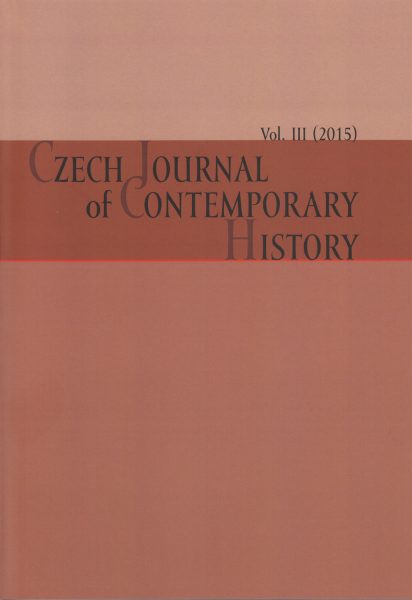 Summary/Abstract: The presented essay was originally published as “Il samizdat tra dialogo e monologo: Le attività editoriali di Zdeněk Mlynář e la scelta degli interlocutori” in the Italianonline journal e Samizdat: Rivista di culture dei paesi slavi (2010–11, pp. 261–80).This double issue is based on papers given at the conference “Samizdat between Memory and Utopia: Independent Culture in Czechoslovakia and the Soviet Union in the Second Half of the Twentieth Century,” which was held at Padua University in late May and early June 2011, and is freely accessible on the periodical website (http://www.esamizdat.it/rivista/2010-2011/index.htm). For its publication in Soudobé dějiny, the author has considerably expanded his essay, particularly after doing research in the Mlynář Papers deposited in the National Archive, Prague.The author concentrates mainly on the research and publishing activities of the politician and political scientist Zdeněk Mlynář (1930–1997) while he was in exile,which he puts into a detailed chronology of his career as a public figure. He asks and seeks to answer the general question whether the milieu of samizdat and independent publishing, which developed in Czechoslovakia in the 1970s and 1980's, did or did not leave deep traces also in the structures of the various political activities of those who criticized the state-sanctioned arts and sciences of “normalization” Czechoslovakia.The author points out that Mlynář has today been largely ousted from Czech historical memory, even though he was amongst the leading opponents of the regime after its collapse, and tried to regain a place in Czechoslovak politics. The author recalls Mlynář’s becoming a member of the Czechoslovak Communist Party,his law studies in Moscow in the first half of the 1950's, where he formed a lasting friendship with his fellow-student Mikhail Gorbachev (b. 1931), and last but not least Mlynář as an expert researching the prospects of the socialist political system in the 1960's. He then concentrates on Mlynář’s work during the Prague Spring of 1968, when he became a member of the reformist leadership of the Communist Party on the side of Alexander Dubček (1921–1992). After the August intervention by the armies of five Warsaw Pact states, Mlynář gradually became disillusioned with the possibilities of continuing reform, and he resigned from the Party leadership.In the early 1970s, he found employment in the Department of Entomology of the National Museum, Prague, and avoided political life completely. Nevertheless, he gradually started to take part in debates with other reformists expelled from the Party about the possibilities of influencing developments in Czechoslovakia with the help of left-wing parties in Western Europe. The author discusses Mlynář’s analyses of the situation at the time, the development of his views, and his integration into the nascent dissident movement, which appeared after the founding of Charter 77. A few months later, in June 1977 to be precise, Mlynář emigrated to Austria as a consequence of a smear campaign against the Chartists. The author focuses on Mlynář’s close work amongst Czech exiles, particularly with the increasingly diverse Listy group, which was established by Jiří Pelikán (1923–1999). The group in question was centered on the exile periodical of the same title, which was published in Rome and formed the core of Czechoslovak socialist opposition in exile. In addition, the author focuses on the efforts of Mlynářand his colleagues to win support among Western left-wing circles, particularly in relation to the Italian Communists and Socialists and later the West German Social Democrats. He also takes into account Mlynář’s political essays, which met with a considerable response amongst the public of Western Europe, and the clear shift in opinion from the initial model of a political system with Communist Party hegemony to political pluralism. In this context, the author then gives a comprehensive account of two large research and publishing projects coordinated by Mlynář. The first project, from 1979 to 1982, was entitled “Experiences of the Prague Spring of 1968”; its participants were almost exclusively Czech sociologists, historians, economists, jurists, and other specialists in exile. The project resulted in almost 30 mimeographed volumes in three language versions (mostly Italian, French, and English), which were distributed by several hundred carefully selected left-wing individuals and institutions in the West, and it culminated in a congress held in Paris. According to the author, this little known project represents one of the most profound and essentially never-published reflections on the origins, development, and failure of the Prague Spring. The second project, entitled“Crises in Soviet-type Systems,” ran from 1982 to the late 1980's, and presented the perspectives of authors from a wider range of central European countries.It resulted in 16 works by Czech, Polish, Hungarian, and East German authors,published by the leading Czech exile publishing house, Index, as small paperback editions in English, French, and indeed German. The number of its subscribers grew to about 2,000. Part of the project was presenting papers at conferences and other international forums. Both of the projects in question, according to the author, demonstrate Mlynář and his colleagues’ persistent orientation to exclusive circles of the political Left in the West, whom, in their efforts to change things in Czechoslovakia, they preferred to the dissidents still in Czechoslovakia.