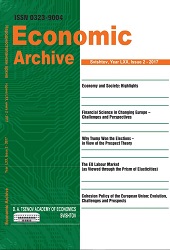 Summary/Abstract: In view of the behavioral approach and the prospect theory, the article tries to explain why an alternative is sometimes chosen, which compared to other options, leads to a worse and more uncertain expected outcome. The example analyzed is D. Trump’s victory in the US presidential elections in 2016. The reasons why he won lie in the candidate’s right strategy which takes into account the voting behavior, and especially in the proper communication with voters, in the reflection effect and loss aversion. The validity of the prospect theory is sought not only in the political choices but also by means of a number of own studies examining its basic assumptions in Bulgarian conditions. Examples are given of applications in other fields.