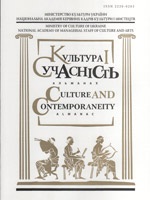 Summary/Abstract: Purpose of the research. The main task of the article is to elucidate the question of organization and functioning of the Armenian Museum in Lviv. In 1932 exhibition of Armenian cultural achievements was opened in Lviv. It became the first step in foundation of the Museum. After the annexation of Western Ukraine by the USSR, museum was closed and its collection was disbanded. The methodology of research includes methods of historical analysis and synthesis as well as method of interpretation. Scientific novelty of the research consists in revealing of the historical context of the foundation of museum of Armenian culture and distinguishing the main stages of its organization and functioning. In addition, some of the items of the Armenian Museum found in the collections of Lviv museums are presented in the article. Conclusions. The foundation of the Armenian Culture Museum in Lviv played a significant role in preserving and reviving the culture of the Armenian diaspora in Western Ukraine, and showed the importance of the ethno-national factor in the cultural life of the region.