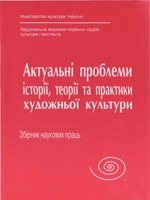 Summary/Abstract: The purpose of the study – Definition a festive spectacle as a phenomenon of visual culture and Features of its construction in media culture. According to the goal, there is a need to consider the main existing concepts of visual culture of both domestic and foreign authors. The current period is marked increasingly clear statement of the benefits of visual culture and its spread, as a characteristic feature of the transition situation is reproduction of visual forms, which inevitably actualize spectacular forms of social and cultural activity. Thus, the spectacle is the central concept, which forms a system of meanings and allows the author to make a selection on its understanding as a cultural phenomenon. Methodology. The research methodology is a synthesis of the structural, functional and semiotic methods. The theoretical information is proved by the representative empirical data from the field of mass media. Working with texts, the author applied specific semiotic approach and elements of structural analysis. Scientific Novelty. The scientific novelty of the research is the creation of the semantic field to study the visual culture of the late XX and the beginning of the XXI centuries. The basic characteristics of a festive spectacle as the phenomenon of the contemporary visual culture are highlighted. The author has introduced new foreign sources that research different elements of entertainment practice in the modern world. Conclusions. Festive spectacle is defined as cultural and philosophical concept, which is ontologically and aesthetically rich and means: 1) an invariant content of any spectacle; 2) an essential feature of the ancient worldview, based on its inherent sense of beauty; 3) conflict structure, based on opposition ( «we – they»); 4) an integrative mechanism, based on overcoming social exclusion that has suggestive and counter-suggestive potentials; 5) the most current cultural form that relates to transitional periods in the development of culture.