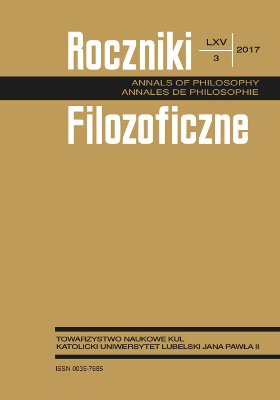 Akty woli w myśli średniowiecznej — od św. Augustyna do Wilhelma z Auxerre
The First and Second Orders of the Will in Medieval Thought: From Augustine to William of Auxerre

Summary/Abstract: Harry Frankfurt’s concept of autonomy that has been acknowledged as one of the most important theories of autonomy underlines the essential role of a moral agent’s ability to reflect on herself and her life. The core element of the concept is the ability of a moral agent to formulate first as well as second order desires. Intriguing seems the fact that we can find the concepts referring to the complexity of the will and its first and second order acts already in medieval thought. In this paper I examine the development of the terminology and argumentation employed in these medieval concepts which analyze first and second order acts of the will as well as the subtle difference between various acts of the will. I focus on the concepts formulated until the first half of the 13th century pointing out to the terminology and arguments which became the point of departure for late medieval theories of the will.