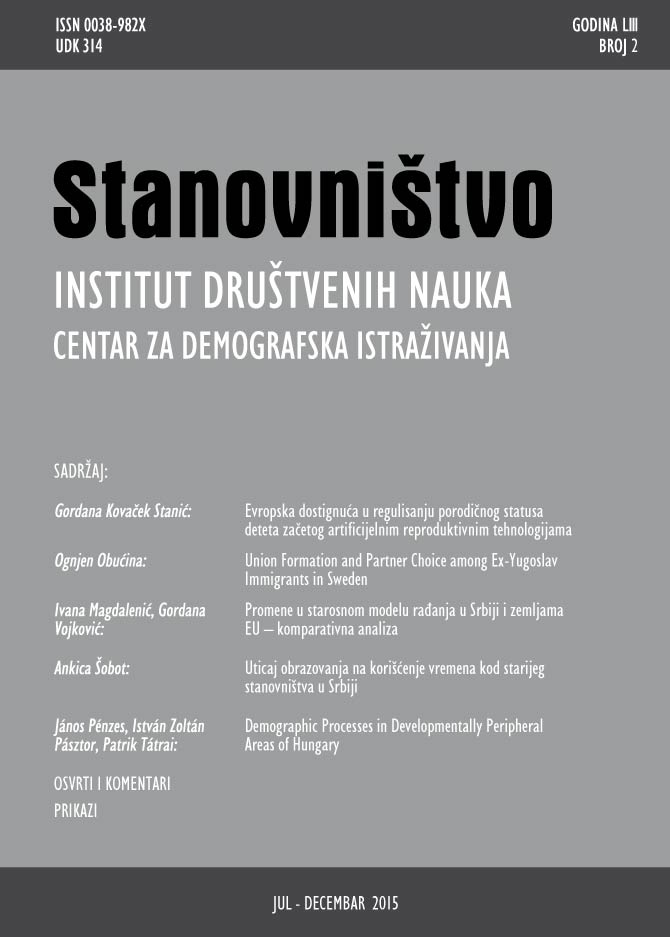 Summary/Abstract: In this paper, the author analyzes family status of the child conceived by artificial reproduction technologies using the following treatments: homologues artificial insemination, heterologus artificial insemination (artificial insemination by donor), ovum donation, embryo donation and surrogate motherhood. One specific situation of homologues artificial insemination is posthumous insemination, insemination after the death of the husband/partner. This procedure is allowed in, for instance, United Kingdom, but not allowed in France, Switzerland, and Italy. Considering genetics elements in this situation there is no doubt on fatherhood – father is a man whose sperm is used for insemination, regardless of the fact if frozen sperm or frozen embryo is used in the procedure. Nevertheless, until 2008 in United Kingdom, the husband/partner was not considered as legal father, because of the fact that the child was born after his death. Heterologous artificial insemination could be used in three different situations. First, when subjects are spouses or unmarried partners of different sexes. Second, when subjects are spouses or unmarried partners of the same sex and the third if a single woman is an only subject. Most recent procedure is the one in which subjects are spouses or unmarried partners of the same sex, specifically two women. This procedure is allowed in the United Kingdom and Sweden. In these legislatures, there is a rule that the woman who delivers the child is legal mother, and her spouse/partner is a second parent of the child. The most recent procedure of egg donation is a donation of only a part of an egg, mitochondrial DNA. In this case, there are in fact three genetic parents of the child: two genetic mothers and a father. Legally, the child has one mother (the woman who delivers a child) and a father. One of potential outcomes of the recent research is the ability to create human embryo without any male genetic contribution – by transferring the nucleus of a somatic cell from one woman into an enucleated egg of another. In that case, the child would not have genetic father at all. Bearing in mind the new artificial reproduction technologies and their influence to legal rules of establishment of the family status of the child, it could be said that the legal principle of the autonomy of the parties is widened in comparison to material truth. People who wish to be parents become legal parents although they are not generic parents. Sometimes they cannot be genetic parents due to their infertility and sometimes because they are of the same sex. As a result of artificial reproduction technologies, a child could have a genetic link with one of the parents, only with a mother – in the heterologous insemination, only a father – as in egg donation and genetic surrogacy. The child could have genetic link with both of the parents – as in the gestational surrogacy, or it could have no genetic links with his/her legal parents – as in embryo donation. According to some European legislatures, it is possible for the child to have a mother and the other female parent, or a father and the other male parent. Surrogate mother, as well as donors of the genetic material, are not considered as parents. Radical change in social and individual perception of parenthood could accept the fact the child could have more than two parents with different roles (biological - genetic parents, gestational mother, social – legal parents).