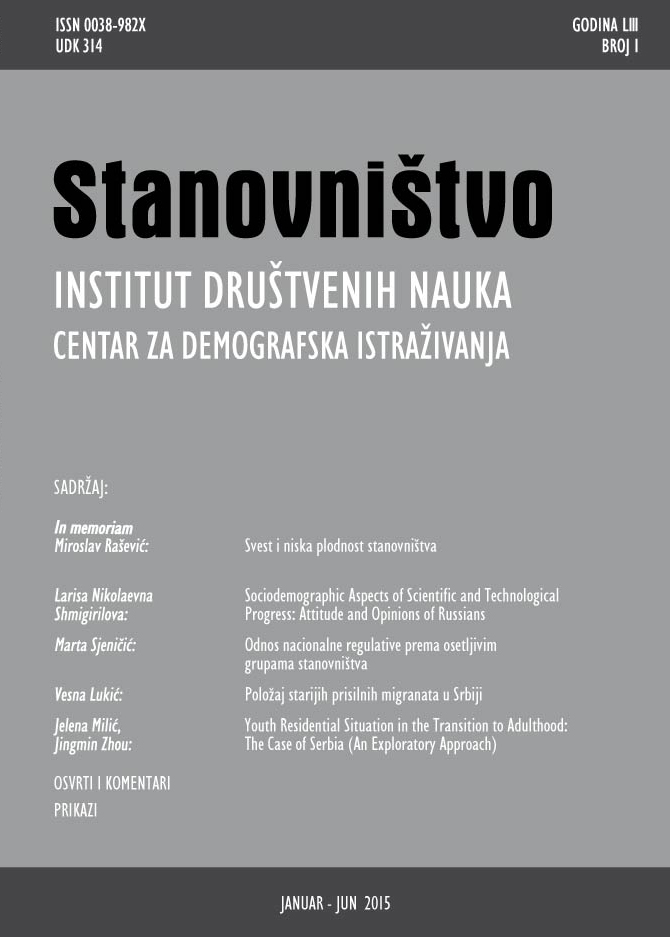 Summary/Abstract: In the context of the needs and rights of older migrants, migration history is particularly important where the elderly forced migrants are twice as vulnerable. Bearing in mind the intense process of population aging in Serbia which holds the attention of scientists and experts, and the large number of refugees who immigrated in the 90-ies from the former Yugoslav republics, selected socio-demographic structures of the elderly forced migrants in Serbia were analyzed as well as the relevant legal and strategic framework. The aim was to contribute to increasing knowledge of the demographic challenges of this subpopulation of forced migrants, as well as the differences relative to the domicile aging population. The data used in this study included a contingent of forced migrants aged 65 and over, on the basis of additionally processed Census data from 2011, based on questions about the place of birth of the person, year of arrival, the country in which the person lived and the reasons for migration. Hence, the category which is the subject of research, is not defined on the basis of formal refugee status. A comparison of selected socio-demographic characteristics was made in relation to the domicile population, which in the paper means the population of Serbia without forced migrants. The research results indicate that older forced migrants in Serbia have characteristics of the general population of older people in Serbia. Their age-gender and marital structures are relatively similar. Most older women are widows who are heads of households, while a significant number are persons with disabilities as well. However, the process of aging of the elderly, present within the local population has not affected forced migrants yet, so this population is to some extent more vital. Data on the economic activity of the elderly forced migrants in Serbia point out to the lack of income as the main problem they are faced with. Older forced migrants are economically active to a lesser extent compared to the domicile elderly population, while the major differences between the two subgroups of the population are observed among the economically inactive persons. There is a noticeable smaller share of pensioners and a significantly higher share of persons who perform only housework in their households of elderly forced migrants than for the domicile aging population, largely owing to the female population. This can be explained by the lower level of female employment of forced migrants in countries of origin but could also result from the circumstances of exile. Single-person elderly households of forced migrants are twice as vulnerable in economic terms than the domicile one, which confirms the high dependence of these groups of older migrants on financial aid. The lack of income of one part of the elderly forced migrants is a consequence of the unresolved issue of pension payments from Croatia, as most of the older forced migrants in Serbia are people from that former republic of Yugoslavia. The older forced migrants in Serbia from the former Yugoslav republics are relatively few in number, but a sensitive population that has legally integrated into the community since 2001 and is facing the same challenges as the local elderly population. Due to the circumstances of refugeeism in Serbia, these persons, as opposed to older migrants in other countries, have no linguistic or cultural barriers that could potentially hinder their integration within society but also within the social welfare and health care. However, although they have all legal rights as the local population, refugeeism gives a specific earmark to the social aspects of aging of these persons, and hinders their integration into economic and social life.