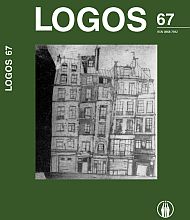 Summary/Abstract: The article presents the 12th century Arab philosopher, scientist, poet and physician Ibn Bajja (Avempace) to the Lithuanian reading community; for he significantly influenced not only the development of Arab and Jewish philosophy but also that of the West. Nevertheless, as the survey of the Lithuanian philosophical literature shows, in Lithuania this philosopher is hardly known: mentioned only in one monograph on early medieval philosophy. In order to fill in the gap, the article proposes some concise information concerning Ibn Bajja’s life and philosophy. Starting with his political philosophy of Platonic origin it turns to his Peripatetic metaphysics and epistemology which constitutes the basis for eudemonistic ethics. In it Ibn Bajja teaches that living even in a bad state, the philosopher is able to reach genuine happiness by ascending the staircases of spiritual forms, or essences, up to the divine actual intellect and uniting with it. The article ends with some critical approaches to Ibn Bajja’s theory and prospect for some further inquiry.