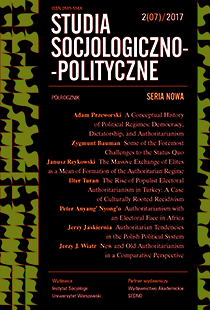 Summary/Abstract: The labels we attach today to distinguish political regimes have histories. Applying them without understanding these histories is sometimes anachronistic and ethnocentric. I have little new to say about “democracy” and “dictatorship”, so that the discussion of these concepts is just a reminder. “Authoritarianism”, however, is a dubious neologism. I advance two claims: (1) In all regimes the power to command and be obeyed entails some dose of reason-giving, (2) What distinguishes regimes is the form and the extent to which the authority of rulers is monopolised by physical force. I conclude that the concept of “authoritarianism” adds little to the distinction between democracy and dictatorship.