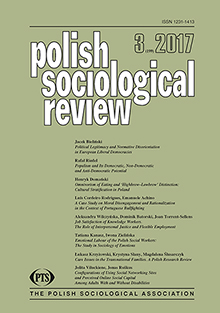 Summary/Abstract: Bullfighting is increasingly seen as a contested practice in Portugal. The Portuguese public generally disapproves of the practice and the Portuguese animal rights movement has dedicated a significant number of their campaigns to protesting against it. Despite this opposition to the practice, however, there is still legal protection of the practice on grounds of preserving it as a national tradition. This contestation and legality has led bullfighting supporters to actively try to defend and rationalize the practice. This paper analyses this defence and rationalization by exploring a case study of the quasi-lobbyist Portuguese organization, Pr˘toiro. The aforementioned case study is analyzed through the use of critical discourse analysis and neutralization theory. The conclusion reached in this article is that the analysis of speech reveals that Pr˘toiro and its supporters try to morally disengage with the harm done to the bull by using justifications that bullfighting is an ethical activity