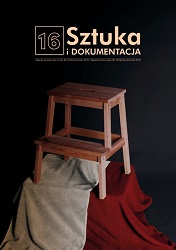 Fenomeny społecznej roli sztuki a demokratyzacja - od zarania kultury do sztuki Kantora i Abakanowicz. Percepcja, ochrona i zachowanie
Phenomena of the social role of art and democratization - from the dawn of culture to Kantor and Abakanowicz. Perception, care and protection

Summary/Abstract: Phenomena of the social role of art and democratization - from the dawn of culture to Kantor and Abakanowicz. Perception, care and protectionArt is not a collection of objects but a form of human activity with great social impact. It is in constant process with the next audiences and their successive generations. Based on Gadamer’s hermeneutic circle it can be interpreted as an action in the democratic sense, a kind of game. The following principal case study is analyzed:Tadeusz Kantor (1915-1990), an excellent painter and interdisciplinary creator organized a programme of conceptual art called Multipart (multiplication and participation). The first exhibition in the series was held in the Foksal Gallery in Warsaw on February 21st 1970 as an "exhibition of one image in 40 copies". Numbered copies of a single picture, entitled Parapluie-emballage, were made according to the artist's instructions. A big broken umbrella, (at that time an symbol associated with the art of Kantor) was glued onto canvas on a stretcher measuring 110cm × 120cm and everything was painted white. At the launch of the exhibition, all the pictures were sold for a symbolic price. Buyers had to sign a contract with Kantor, according to which they could add to the image: "Insults, expressions of approval, praise, sympathy, swear words, (...) erasures, deletions, drawings (...) changes to the image according to their own tastes (...) pierce it, burn it (...) sell, buy, speculate, steal it". The important thing was that the buyers were obliged to re-exhibit the works in the Foksal Gallery after a year of such treatment. Thus, on 20 February 1971, a second exhibition of works by Kantor was held, Multipart 2. This presented the year-old participatory works parapluie-emballage and there were surprising forms of ‘participation’. One unique form of ‘participation-democratisation’ included in the programme Multipart, was the picture which was bought by the “Zuzanna group”. They sowed cress seeds on the image, then treated it as a dish at banquets. Moreover the picture that they had bought was used as a banner in the May 1st communist parade in 1970, where students chanted ‘Kantor’ instead of ‘Lenin’, which was then risky. The event was immortalized in the artistic film Multipart by Christopher Kubicki and Mark Młodecki, which was shown during the exhibition at the Foksal Gallery in 1971. Kantor was positively surprised by the democratisation of his project.This was not the end of the participation of owners. After the exhibition the picture was officially buried in the earth along with a ‘procession’ to the accompaniment of string instruments. After 44 years, at the request of a group of architect-owners, on the 18th of May 2015 conservators undertook the careful exhumation of the object under the title Multipart in process. The remains were removed from the ground and conserved, making reference to documentation of its state before burial and was reassembled on a mount.Very important is the sense of Multipart. Kantor, by departing from his personal creation of the works, questioned and redefined the very concept of a work of art, traditionally treated as the creation of specific authors, the effect of the artist's work. In this case, the idea of these works was his and he created and presented their concept and their technical description. Denying the uniqueness of works of art, at the same time Kantor challenged the position of museums, galleries and collectors – directly to democracy in art. The action Multipart is one of the best-known projects organized by Kantor. It opened a new chapter in thinking about art in the world and in Poland. Paradoxically the Multipart continues (!) as does interest in it among collectors and museums. Due to the unusual character of the work and the need of dissemination, the arrangement of the 'learning zone' explains the conceptual design of Kantor and presents his ideas and their consequences in terms of the fate of an object called Multipart in process.Other case studies are devoted to the spectrum of time, starting from a democratic sense of paleolithic art as well as from the contemporary sense of Magdalena Abakanowicz’s art in public space. The phenomena of art, which consists in its constant inclusion and conservation, allows various forms of social roles to be presented and preserved. Finally, the idea of democracy is based on a paradoxical antinomy: ‘art in process - process in art’. It also requires maintenance for subsequent generations, protection, conservation and sometimes reconstruction.