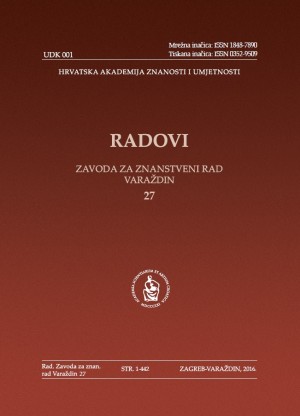 Summary/Abstract: During the First World War, Varaždin’s population increased temporarily in the number not only due to many soldiers and the wounded, but also due to civilians, i.e. Austro-Hungarian citizens, who were forced to evacuate and then interned in Varaždin’s region, or who ﬂed from the war area and arrived in the town. The interned Serbian citizens from Sriem and other neighboring counties were taken into the home guard barracks in Varaždin, to private properties in Jurketinec, Klenovnik, Konjščina and Bisag, and to the brickyards in Cerje Tužno. The internees returned home after the war operations on the Balkan battlefield had ended. The first fugitives were clergymen of St. Basil’s Order from Galicia, who ﬂed from the war area during the autumn of 1914 and stayed here in the Franciscan monastery in Varaždin until the summer of 1916. The fugitives were not a homogeneous group if we consider the reasons why they had ﬂed: war horrors, army violence, poverty, dearth, hunger, and struggle to survive.