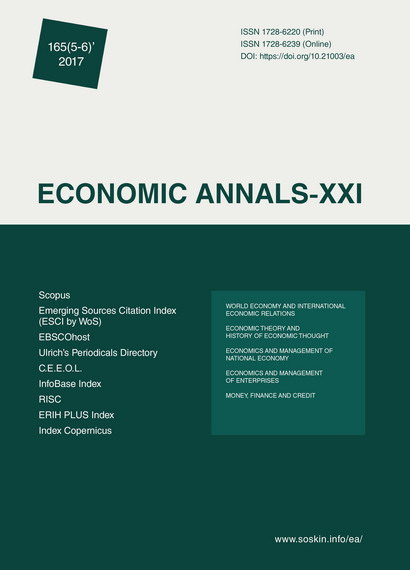 Summary/Abstract: Introduction. The authors analyse the mechanism of the economic cycle formation under the influence of economic agents’ expectations. It is emphasised that one of the main reasons for the termination of economic growth is generation and accumulation of systemic risk in the economy due to unreasonable expectations. The purpose of the research is to analyse the process of the economic cycle formation under the influence of economic agents’ expectations in the USA in the period from 1947 to 2016. Methods. The authors of the article offer their own methodology to analyse dynamic processes by transforming primary data and applying the author method of total sliding expectations for time series analysis. Results. Based on the analysis of data related to GDP of the USA, it has been concluded that the peaks of economic cycles in gross domestic product (GDP) values accurately reflect the peaks of time series of the total sliding expectations by GDP values. However, there were periods when the maximum of sliding expectations time series occurred without reaching the maximum gross domestic product. An approach to economic entropy as synchronisation of expectations level coincidence with the actual course of events in the economic system is given. The entropy reaches its peack under the reversal of the economic system, when business profits are also maximised due to cheap resources and services. The phase of economic growth will last until certain economic agents accumulate a critical amount of divergence between the expectations and the actual capital efficiency. Once the level of economic entropy has dropped below the conventional critical limit, the crisis is inevitable because of overwhelming economic agents› erroneous actions. Conclusions. The proposed conceptual approaches to explaining the economic cycle mechanism are based on the real economic mechanism and can therefore be applied to forecast it.