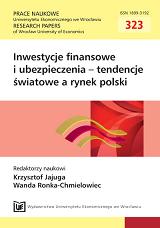 Summary/Abstract: In the paper we try to decompose the spread between the rates of Polish interbank loans (WIBOR) and the rates of OIS contracts. In the literature this spread is considered as the main index of safety and liquidity of the money market. We argue why the spread between those two interest rates can be attributed to the two factors mentioned above. Then we use two methods for decomposing spreads into risk premium and liquidity premium: classical regression and dynamic regression. The analysis that we have performed indicates the superiority of the second, more complex method. The results indicate that the growth of risk premium was responsible for the increase of spread in the second part of the year 2008 and that the liquidity premium accounted for the most part of the spread in the years 2009−2012.